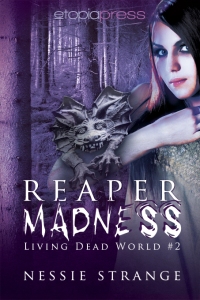 This isn’t the afterlife she expected…

Jen MacLellan can’t get the hang of being a reaper. She’s been separated from Jack, the man she loves, and is stuck with an annoying telepathic link to her ill-tempered mentor, Sam. Now Death is breathing down her neck, promising to remove that annoying link if she gives him what he wants. But when reapers begin to disappear back on earth, leaving behind walking, talking dead people, Jen and Sam are thrust into a dangerous mission to recapture the souls, and a passionate physical relationship that complicates everything.

Jack Norris has no memory prior to waking up on the half-demon Nulcifer’s couch six months earlier. As he begins to investigate his past, he discovers a string of past lives tied together by a beautiful, mysterious brunette. Who is she? And why does finding her seem like a life or death proposition?

When Sam falls victim to fate during a routine visit to earth, Jen’s devastated. Desperate to get him back, she runs smack into the man she never thought she’d see again—Jack. She tries to keep her distance, but there’s no time to be awkward if they want to save Sam. When sinister plots are revealed, and betrayals threaten everything, she’s forced to make some tough choices—and learns that life is just as difficult when you’re dead.

Reaper Madness is the second book in the series, Living Dead World.

The first, Living Dead Girl, introduces the reader the main characters – Jen and Jack. These two have a heated first encounter, which makes their love story very unexpected. While they are planning their future together, a woman with a fatal attraction to Jack plans Jen’s demise. I won’t give away too much about how Living Dead Girl ends, but let’s just say that both Jen and Jack end up in the afterlife.

Now, in Reaper Madness, Jen has been assigned to Sam as a Reaper and Jack is stuck in purgatory with a blank memory. They have become lost to each other in this strange realm between heaven and hell. Over time, Jen starts to fall for her partner Sam, who is so much more than he first appears. But when Jen and Jack finally find their way back together, strong forces work to keep them apart.

I really liked both of these books. The dialogue was sharp and smartly written. Jen, Jack, and Sam have interesting personalities that played well against each other. Reaper Madness was a different type of paranormal than I’m used to reading. I thought the afterlife world was well crafted and multi-layered. It kept me wanting more.

Luckily, the author has another book to add to the series! I can’t wait to find out what happens next.

Nessie is a Massachusetts native and mother of two who has dabbled in everything from abstract painting to freelance sports reporting. She also loves a good story, whether it’s reading or writing one. Living Dead Girl and Reaper Madness, the first two novels in her urban fantasy Living Dead World series, were published by Etopia press in 2014.